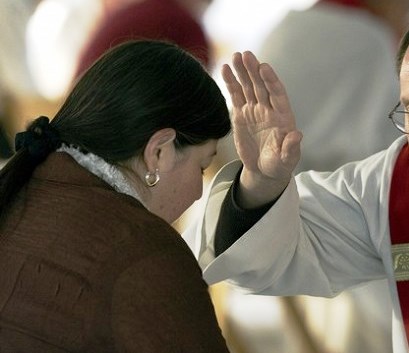 Depending on what you’re reading from Luther, you will find him stating at some points that there are two sacraments and sometimes three. The Lutheran reformers wanted to move away from the Catholic definition of the term “sacrament” and bring it more in line with the things God stood behind. That led them to define the sacraments as those rites or acts that can satisfy three requirements: 1. They must be commanded by God. 2. They must confer God’s grace. 3. They must have some physical element.

Baptism and Communion both satisfy all three quite handily. They are both commanded by Christ. They both bring grace, and they both have a physical element to which God’s promise of grace is connected. Every so often though, you’ll find Luther referring to a third sacrament: Absolution. We Lutherans don’t talk about a third sacrament very often, because Luther more or less settled on Baptism and Communion. But, Absolution is also worth considering because of its importance to Christian life.

At first it might not look like Absolution fits the bill. Sure, it has God’s command. John 20 tells us how Jesus appears to the disciples and gives them the “Keys to the Kingdom,” or the authority to pronounce God’s forgiveness to the repentant and God’s condemnation to the unrepentant. Obviously, absolution conveys God’s grace. The physical element is where Luther wavers. When he calls Absolution a sacrament it is because he considers the pastor to be that physical element.

That fits with the doctrine we call the Office of the Keys, we acknowledges that the pastor is the one who administers those keys publicly on behalf of the church. Every Christian is authorized to speak God’s forgiveness on a personal level, but the pastor speaks for the whole congregation. This, it is him you will up at the front and it is his voice you will hear when you have confessed your sins.

In terms of function, Absolution is every bit as important as the two, more usual sacraments. Each has their own purpose and they all work together to build up the Christian through God’s free gift of grace. In terms of order, Absolution is the one we hear first. It is the distilled Gospel message. “On account of Christ, your sins are forgiven.” Thia is what God says to all who confess their sins to Him and Confession is the first and most basic act of faith. It is on Confession and Absolution that the whole rest of Christian life is based, and that includes both Baptism and Communion.

The next time you are in worship or meeting with your pastor privately, consider why God set up the church the way He did. In His wisdom He has ensured every member of the congregation would have someone to tell them specifically that God forgives them. When your pastor speaks those words of Absolution, He speaks with the full backing of God Himself because he has been authorized to do so. The pastor is the physical assurance that God means that message to go right to you and has sent your pastor to convey it personally.